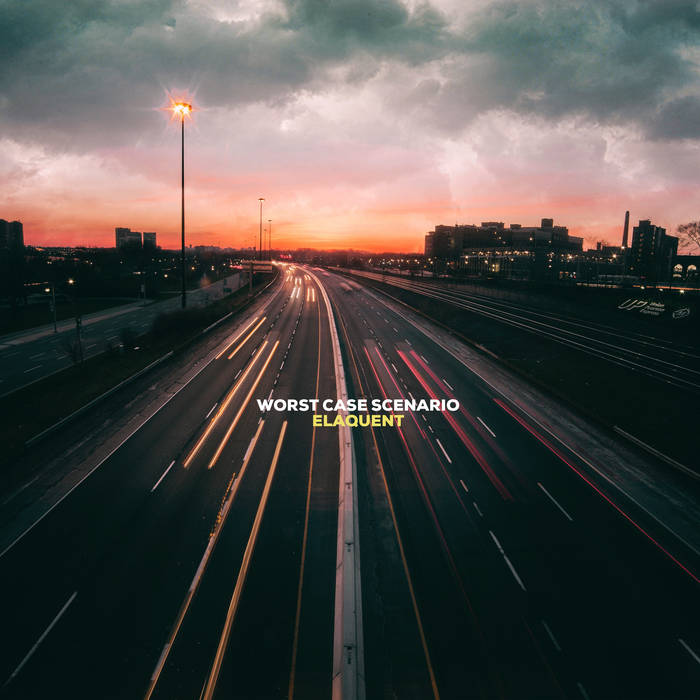 Étienne Champagne one of the best beatmaker of our era. Favorite track: Sweet Dreams.

laron alajawn It gives you a feel that is beyond Earth. It takes you to paradise.

PRESS: BANDCAMP REVIEW
Having already established himself as a prolific beatmaker with a growing catalog, Elaquent could’ve simply released another collection of sample-heavy, head-nodding instrumentals—that’s how he built his fan base, after all. But on Worst Case Scenario, his latest album, Elaquent delivers a personal work focused on life’s unexpected twists. Scenario deals with the search for inner peace in a world of constant chaos, and learning how to be content when things don’t go as planned. Its songs are transformative, and the album as a whole seems designed to calm and to relax.

Its 12 tracks are full of nuanced beats that contain snippets of Elaquent’s previous work, mostly from the albums The Scenic Route, Less Is More and Good Karma. While he’s always spiked his sound with lush R&B and soul, Worst Case Scenario feels richer and more fully realized, a culmination of the wistful aesthetic he’s strived for over the years. On “Nollieflip,” Elaquent constructs a Dilla-esque stomp, complete with faint keys, floating organs, and rising synths. “Spur of the Moment,” with its heavy drums and cricket chirps, has a strong nocturnal vibe, landing somewhere between Oddisee’s instrumental work and Flying Lotus’ Cali-focused electronica.

PRESS: FADER Mix: Elaquent
For his first-ever FADER mix, Elaquent hunkered down in his bunker, a basement studio, to create a mix for that particularly January form of solitude, when you're taking a break from social commitments and staying in to study, recenter yourself, or just get your housekeeping game back up. Elaquent's been a fixture on the Toronto-Montreal beat circuit for a minute, but this mix features contemporaries from across the scene like Tall Black Guy, NxWorries, and Mndsgn. There are also contemplative cuts from his latest album, Worst Case Scenario, which, as Elaquent lets us know in the Q&A below, isn't death by winter boredom.
~~ Anupa Mistry | thefader.com/2017/01/11/fader-mix-elaquent

The seamlessness of Elaquent's production is deceptive; multiple listens are required to unveil the complexities of each track. Off-kilter beats, steady bass patterns, lush synth tones and intricately composed melodies combine to create a project that enchants and soothes. Opening track "Nollieflip" epitomizes Elaquent's multilayered production, its combination of xylophone, melodic sighs, and breakneck beats foreshadowing the distinctively diverse sound elements that are woven throughout the project.

Trumpet can be heard more than once in the album ("Caviar" and "Perchance to Dream"), and wavy synths combine with cricket sounds and the flute in jazzy cut "Spur of the Moment." On "Maharaja," one of the only two tracks featuring vocals, A l l i e's sultry voice blends with a gentle piano melody and a midtempo rhythmic pattern comprised of eclectic percussion samples. "Shibuya," which features Japanese producer Budamonk, elucidates the influence that Elaquent's recent travels have had on his creative process.

Worst Case Scenario is an inimitable, undeniable success for Elaquent that allows his raw talent to shine, while boasting a more refined and focused sound than his previous works. (URBNET / Fontana North)
~~ exclaim.ca/music/article/elaquent-worst_case_scenario


PRESS: SCRATCHED VINYL 9/10
Worst Case Scenario reminds us that Elaquent is one of the most creative and talented producers of his generation. It’s a really smart, soulful, and moving album from start to finish.
~~ Chi Chi | scratchedvinyl.com?q=node/2758

ABOUT:
Growth is about adaptation, existing in transit, and nourishing flux. It gives us a reason to move on to our next project, challenges us, and feeds our creative hunger.

Sona Elango, as the multi-talented Elaquent, captures a catalogue of experiences and feelings that span time zones from over the better part of 2016. Elaquent has created a reflective sound weaving themes of travel and personal growth into the core of his music. Worst Case Scenario is a record with roots in Europe and Japan, inspired by moments of reflection in hostels, airports, and trains. It boasts Elaquent’s growth not only as a beat maker and producer, but as an artist, conscious of peers, music lovers, and strangers alike. He explains how “I wanted it to feel personal and conducive to who I am, but I’ll let everyone deduce what they want about each song. It’s open to interpretation.” Elaquent demonstrates that relative themes have a power that is bigger than ourselves. He manages to hit the bittersweet mark of self-reflection perfectly, reminding us that sometimes the most daunting and intimidating reflections, can secretly be moments of peace and reassurance.

“...going on 30, no longer feeling like you're invincible, everyone is getting married and living a completely different kind of life. I don’t want to get old, wondering whether I did everything in life that I wanted to do. This album, Worst Case Scenario, it’s the idea that if all else fails, I’ll know that at least I was able to do all these amazing things in my life”.

Worst Case Scenario is ultimately a public chapter in Elaquent’s life, embodying an unhurried yet vibrant form of personal storytelling. “It’s a soulful and colourful record” he says. “I was in a different mindset; it was a challenge to myself. I wanted to expand on previous concepts, and make a record that is about doing things not just to do them, but because it makes sense”. Unabashedly human, and eager to make it count, Elaquent is a reminder to us all that we’re here for a good time, not a long time.

THANK YOU:
Everyone involved; Iman, Allie, Octavio, Budamonk, Scooter, Soteeoh, Paul Chin, Darryl & everyone at Urbnet. My whole family, i love you all.