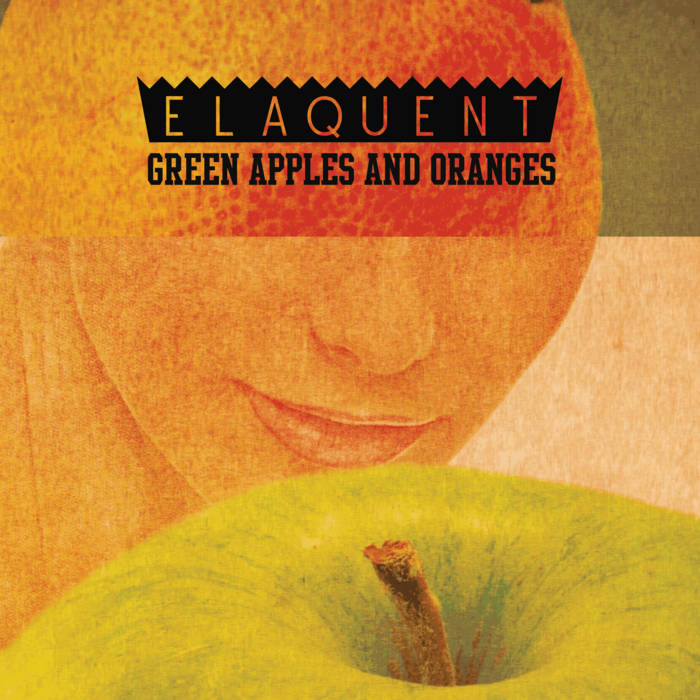 leejames had a pleasure of having this dude at our club......bring out a neck brace eq continues to make classic beats quality all day........... Favorite track: Aurora (feat. Esta).

Gabriel Rhodes Elaquent never ceases to impress with the mellow vibes. From start to finish the senses are intrigued

Gloam Elaquent just doesn't make any material not worth listening too, I'm always eager to press next, just to push my enjoyment to a whole other level. Flow Worthy! Favorite track: Oreos.

"Canadian hip-hop sensation Elaquent returns with the Green Apples and Oranges EP - another vibrant exhibition of ahead-of-the-curve production and musicianship from one of the great young producers in the game. Following his excellent 2012 EP Parallel, the Guelph, Ontario-based artist says he sees this new collection as a diverse, challenging attempt at furthering his skills as a composer."
~~ URBNET / urbnet.com/eQ

"From LA to Paris to Brooklyn, essential Toronto beat-maker/producer Elaquent has been breaking necks from country to country with beat-heavy hip-hop sound chock full of influences from jazz to funk to soul. As member of the impressive URBNET label roster, he has recently released “Green Apples and Oranges”"
~~ editor / northdelawhere.happeningmag.com

"What makes Elaquent special is not that he's doing anything extremely weird or left field with his music, it’s that he’s just really great at making instrumental hip hop songs stand out by doing all the subtle things very well. One way he does that is by creating some really interesting loops that won’t start or stop at the most obvious place, but will blend in with the rest of the instrumentation and beat perfectly, and will stay in your head long after the song is over. He also has a really gentle touch to his production, especially with the melodic elements, but balances it perfectly with the ability to drop bass and drums that can blow out your speakers. "
~~ Chi Chi / scratchedvinyl.com

" Regardless of your preferred genre, when you’re looking for something easy to kick back and relax with, Green Apples and Oranges provides eight mellow, polished and authentic songs to enjoy"
~~ Katarina Atherholt / thegauntlet.ca

"The atmospheric sweetness and quirk of Green Apples and Oranges recalls Thundercat’s Apocalypse, a notable 2013 record from a higher-profile peer. Guelph’s finest might be taking the longer route to producer stardom, but it’s already bringing him closer to being as good as the best. 8/10"
~~ ANUPA MISTRY / thegridto.com

"Green Apples and Oranges is ripe for the lounge or just about any place where some undercurrents of cool are called for"
~~ Canadian Music Blog / musiccanada.wordpress.com

“Elaquent’s been slowly bubbling up from the underground for a while now - and much like a bottle of champagne he's just been waiting for someone to pop the cork and let out the goodness. His bio pours on more superlatives than this reviewer could though - calling him everything from "vibrant" and "ahead of the curve" to "infectious" and "catchy." That's bad if you're H1N1, but that's pretty damn good if you're making beats. Hyperbole and superlatives mean nothing though if you don't back it up when it's crunch time.... I'm happy to report that Elaquent lives up to his hype... Music Vibes: 8.5 of 10 Lyric Vibes: n/a of 10 TOTAL Vibes: 8.5 of 10 ”
~~ Steve 'Flash' Juon / RapReviews.com

"This one is for the instrumental fiends out there"
~~ One Throne / onethrone.us

"This EP has smooth vibes all over it that keep growing with each subsequent listen."
~~ Expansions Collective / expansionscollective.com

"The beats on the release range from slow, soulful-driven tunes to a futuristic blend of boom bap instrumentals that are guaranteed to make your head bounce."
~~ nickabitia / soundcolourvibration.com

"... he consistently bridges the gap of modern producing while keeping a finger on the classic sounds of funk and jazz."
~~ Giovanni / beatsframesandlife.com

"Elaquent's Green Apples and Oranges EP is out now and sounds amazing! This is the first time I have heard music by this talented Canadian producer, and I am a huge fan now. His new EP is funky, jazzy, and packed with those songs that I cannot stop playing. Two thumbs up."
~~ seJoon Park / soundtribelc.com

"By far one of my favorite producers right now."
~~ JE Sheehy / cinqkhz.com

"This is yet another vibrant exhibition by the Canadian producer of ahead-of-the-curve production and musicianship from one of the great young producers in the game."
~~ Bradley Blanc / WeUnderground.net

"his keyboard melodies and slinky synth lines feel sexier and smoother, and give a futuristic edge that counters his throwback tendencies"
~~ Benjamin Boles / nowtoronto.com