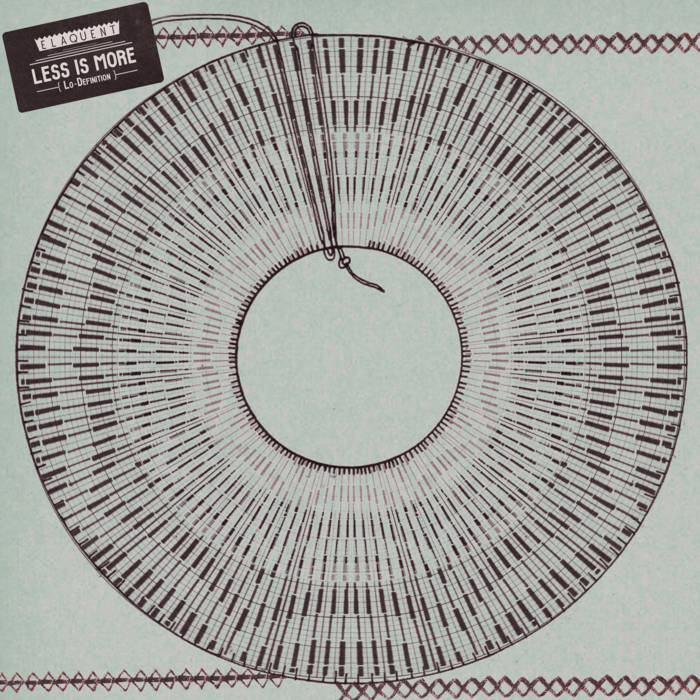 PRESS: On the Ones with Elaquent: 40oz Heroes
URBNET artist Elaquent sits down to talk J Dilla, Nintendo Gameboy, and why Like Water for Chocolate is his favourite album.
Subscribe to 40oz Heroes for more
~~ youtube.com/watch?v=fu0rBaGvzFo


PRESS: THE STONER GIRLS CLUB: Another dope release from one of my favorite Canadian artists, Elaquent.
~~ stonergirlsguide.com/2015/12/05/new-hip-hop-elaquents-less-is-more-lo-definition


PRESS: OLD TO THE NEW: The Canadian producer delivers an impressive, largely-instrumental project, showcasing his talent for mixing old influences with new sounds, resulting in a listening experience that is full of genuine feeling and organic vibes.
~~ t.co/c1srnAUJy1


PRESS: BAMALOVESOUL.COM Finally released in it’s full glory, Elaquent’s Less is More is finally here. At 18 tracks long, the Canadian beatsmith clearly doesnt agree with that sentiment but his impressive beats will make you overlook the misleading title. The project is dedicated to “the beatheads,” and you can tell he falls within those ranks with influences ranging from Dilla to Knxwledge. There are even a few vocal assits with the vibes & sax led Saul Good being one of my favorites
~~ DJRahdu | bamalovesoul.com/headlines/elaquent-less-is-more


PRESS: THESCOPEATRYERSON.COM LONG WINTER 2015/16: NOVEMBER
Elaquent orchestrated a set of finely-tuned conditions built for the dance floor. It was the electronic-hip-hop fused beats that did it. Not exactly conventional sounding, unique in its slightly-off feel that managed to keep an accessible rhythm, which clearly took hold of the crowd. A mix of material was played, where you could pick out remixes of Kendrick Lamar’s “Momma,” Kelis’ “Caught Out There,” which gave a contrasting rough edge to the set and a distinct take on the undeniable dance number of Amerie’s “One Thing.” Simply put, dancing shoes were necessary, yes even for that two step.
~~ thescopeatryerson.ca/en/thescope/events/765/Long-Winter-201516-November.htm


BIOGRAPHY: Canada-based hip-hop producer Elaquent returns with an 18 track release titled Less is More (Lo Definition) on December 4th, 2015; available now on URBNET with early streaming for 3 tracks. This 18 track release is available on cassette with exclusive bonus track Look In Her Eye -- and digital download.

"I've put out many albums. My sound has evolved quite a bit over the years. More layers, more complexity, more structure, more synths, more experimentation... but sometimes the beauty is all in its simplicity. I always liked to say in the past and still say it today: perfect is boring. Human beings are flawed. So let's embrace it. Less is more.” - Elaquent

Elaquent is certainly no rookie in the thriving beat scene. He is actually something of a hip-hop deity. Known for his smooth, soulful style; his off-kilter, neck-break beats; and his obsession with Batman and Sega Genesis. Elaquent is finally beginning to reach his full potential. Elaquent, commonly known as “eQ” has been making his mark on the independent beat scene in a big way over the last few years with a large discography of well received instrumental albums.

Since the ninth grade, eQ has been mastering his production techniques while creating a sound uncommon to the crop of other local producers. Citing J Dilla and DJ Premier as some of his earliest influences, eQ has become much of a fan-favorite among beat aficionados in Toronto. After a string of successful releases, including The Scenic Route, Green Apples and Oranges, and most recently, Good Karma, eQ has taken his show on the road armed with his trusty SP-404sx loaded full of beats. Having toured all around the United States and many parts of Europe, eQ shows no signs of slowing down. Needless to say, Elaquent is on the come-up and it is going to be beautiful.

"I made a beat tape called In Colour in 2007. Consider Less is More (Lo Definition) a revisit to that time. Raw material. Dusty sample flips, jumpy basslines, unquantized drums, loops. This one is for the beat heads. Back to the basics.” - Elaquent

Pre-order Less is More (Lo Definition) today, get excited for the full release this December 4th, 2015 on URBNET.

New sounds from Mavi, Ivy Sole & Moderator, plus AJ, the One joins the show, for her latest release